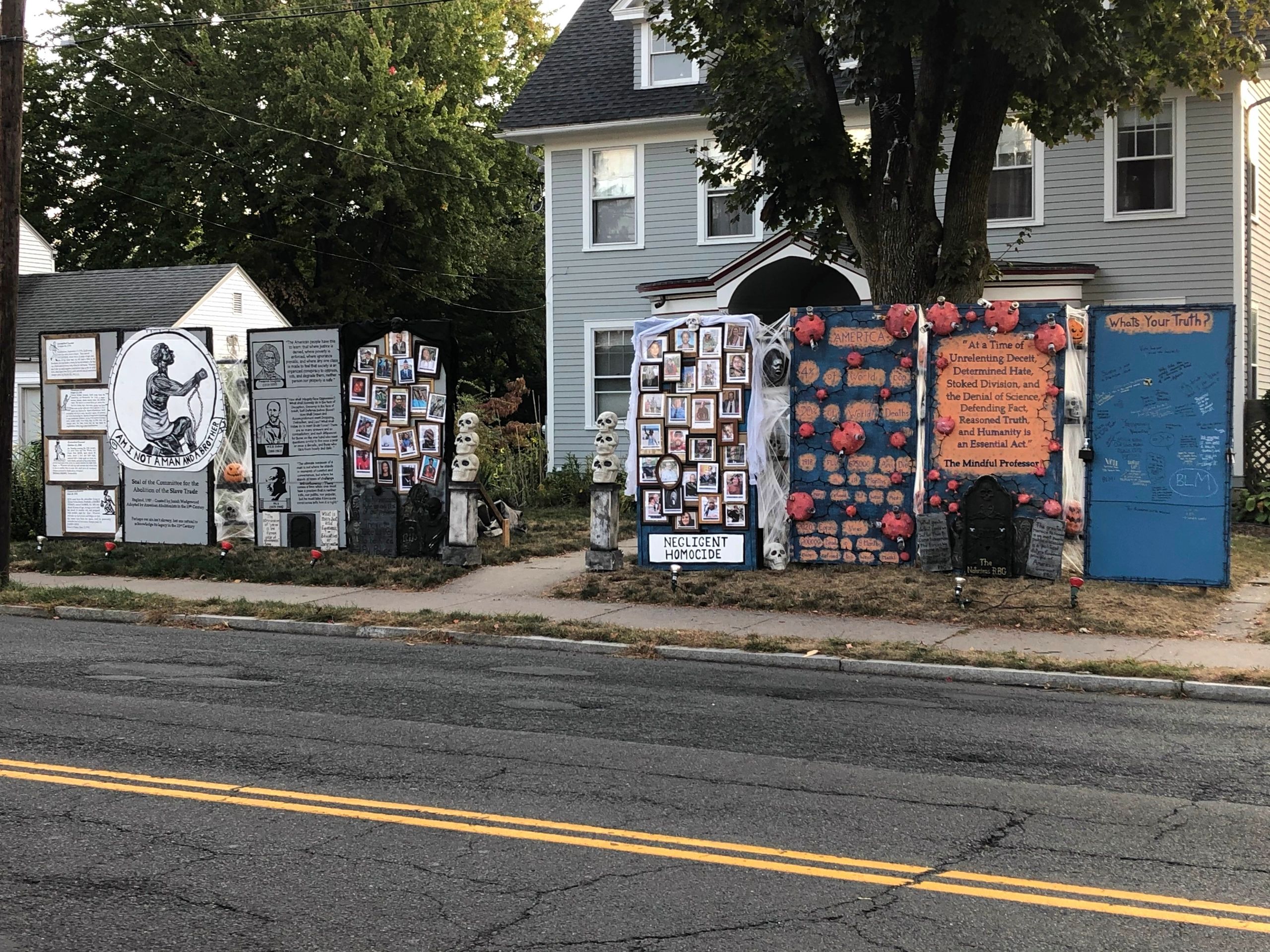 The Presidential Election - Scarier than ANY Halloween

Many of my previous displays have foreshadowed what is happening in America today –  “The Fall of Rome,” “The American Ship of State,” “The Death of Democracy,” “The Threat of Tyrants” – it’s all coming to fruition. The U.S. is in chaos and while there is so much to choose from in our quickly devolving political system, this year’s display focuses on two of the major issues that have dominated 2020 – the year that just keeps giving.

Black Lives Matter and the Corona Virus have challenged and awakened many Americans to the racism, corruption, and malfeasance endemic to our “democracy.” The Trump administration, with the support of a pandering, unethical Republican Party, is literally destroying our nation. Whether it’s their refusal to recognize that systematic racism is real and a legacy of slavery, or the utter incompetence of the Covid “response,” the GOP and its maniacal “horror-in-chief” have proven that they possess no ethical mooring. They covet power, little more.

The BLM portion of the display is focused on both the black lives lost to police violence, (keeping in mind that blacks make up only 13% of the population, but are more than twice as likely as Whites to be shot by the police), and on the history behind the movement. Before BLM and MLK, there was a small but potent group of people – abolitionists – who fought for the lives and freedom of Black people. One of the panels includes the historic image of a chained slave with the words, “AM I NOT A MAN AND A BROTHER.” This was one of the earliest British abolition symbols and quickly adopted by American abolitionists. Also, in the display are runaway ads from Connecticut newspapers, just to remind people from my state that slavery existed here, not just in the South. Finally, there are important words from three of America’s leading defenders of their people: Frederick Douglass, W.E.B DuBois, and Martin Luther King, Jr. How can one read what these moral, thought-provoking Black Americans said without commiserating with their and their people’s plight?

AND JUST TO BE CLEAR – My display is not meant to be anti-police. I have several friends who are, or were, police officers. They are good people. They work hard, help their community, and often have to face the worst of humanity. The majority do it with compassion and commitment. But there are a small minority – like the officer who murdered George Floyd in broad daylight – who sully the term “officer of the law.” These people endanger all Americans and their fellow brother and sister officers.

AND, those who respond to the idea of BLM with “Blue Lives Matter” or “All Lives Matter,” don’t get it. Of course, police lives and other lives matter. That’s not the point. It’s the fact that Blacks make up only 13% of our population yet are twice as likely to be shot by the police as White Americans. If you can’t wrap your head around this fact, then you are part of the problem.

The Covid portion of the display focuses on the inept Trump response and the reality of how serious the pandemic is, no matter how much the GOP tries to downplay it. Sorry, it’s nothing like the seasonal flu, which on average kills between 15,000 and 25,000 Americans in a calendar year. The 2018 flu season killed 40,000, and that number alarmed both the CDC and the NIH. America is now at well over 200,000 in only 8 months. This is much worse than the season flu. It’s far more comparable to the 1918 Flu pandemic that killed 675,000 Americans.

How can anyone conclude that Covid isn’t serious, or that Trump hasn’t bungled the response. He denies science, and the GOP and his followers swallow wholesale whatever he says. Please wake me up when we leave the land of disbelief!!

If you want better, closer up pictures, please use this link.

News Media on this year's display